「All three stations share the theme of flow, but they handle it in different ways.

The Shin-Minamata Station creates flow from unit pieces.
The screens of the Kashiwanoha Park Station are flow itself.
The architecture of the Kashiwa-tanaka Station is an object placed in the midst of flow.

Part and Whole: From Architecture 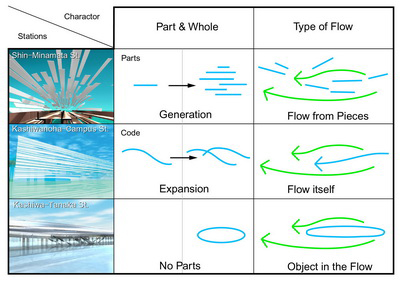 There are additional similarities and differences between the three stations from the viewpoint of part and whole.

From Station to Community / Who Makes the Community ? 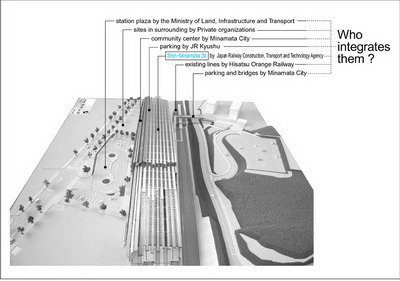 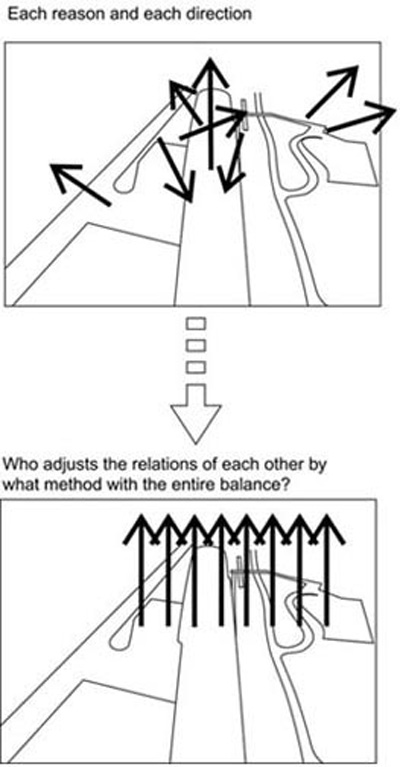 In response to this situation, as the architect of the new station, I took it upon myself to meet with the various organizations involved and urge them to think about coordination.
I explained the importance of integrating the various designs and suggested some methods for doing so.
As a result, the development is now headed in the direction of overall coordination. (In fact, the same situation is found inside the station as well as outside.
Different departments are responsible for architecture and lighting, communications equipment, signage and so on, making it quite difficult to achieve an integrated design.)

Image / Integration of the Whole 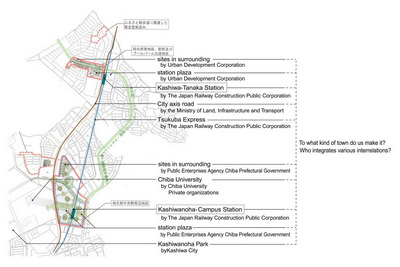 The situation was similar for the two Express stations.
Overall coordination extending beyond the station plaza was even more important, since in these cases new communities were to be developed around the station. Conferences between the city and developers have been continuing for two years now, but there are many detailed technical issues to resolve and progress is slow. To create harmony in a community, a consensus must be reached on what kind of community it wants to be.

Without this kind of image, there is no direction to guide individual efforts at coordination. Therefore I proposed to the city that a forum should be established where developers and residents could meet to discuss the image of the community. The idea that the town as a whole should be an open campus is one proposal that emerged from this process.

This work is being done on a volunteer basis. But harmonious development of the station and surrounding community would not be possible unless someone does it. In the future, it would be preferable for coordination work to be placed at the center of a project, so that it is not left up to volunteer work and individual initiatives. I will feel fortunate if these three stations serve as an example of its significance.

If this happens, the question becomes concrete methods of coordination.
When systems for overall coordination are weak, as in present day Japan, cities will lack the kind of charm that comes from a unified appearance.
On the other hand, however, this has the advantage of bringing out the vitality of the various parts. Forcibly imposing a master plan from above under the rationale that harmony is important might produce a well coordinated city, but at the cost of less freedom and impaired vitality.

To discover a new type of harmony, which is neither imposition from above nor anarchic clutter, a new method must be found to relate parts to the whole. Induction Design is a research project which approaches cities with that kind of goal.