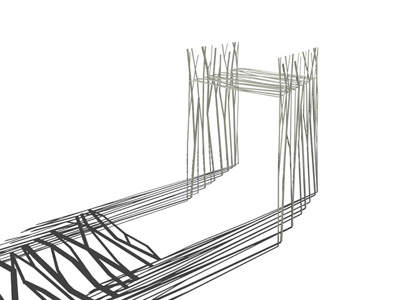 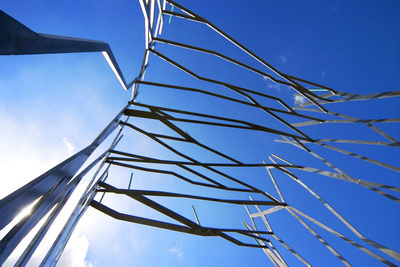 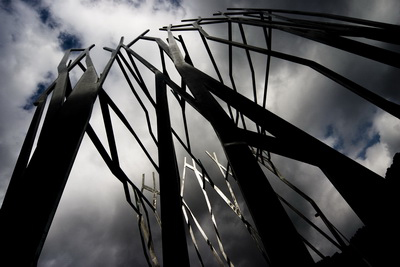 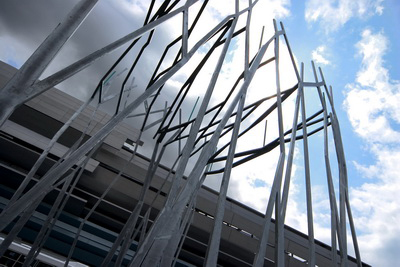 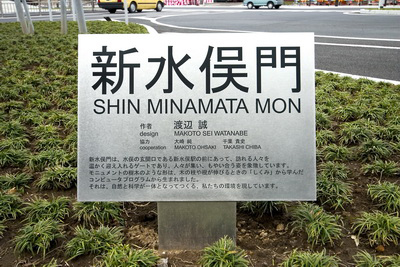 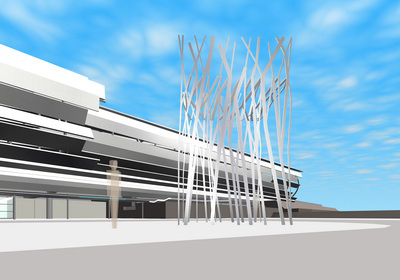 Following the completion of the Kyushu Shinkansen ShinMinamata Station, the author was commissioned by the city of Minamata to design and built a monument for the plaza in front of the station.

Two purposes were involved. One was to design an object to express the ShinMinamata Station, the new gateway to the city of Minamata.

The other was to generate the object by a program that integrates form generation and structural mechanics.

The result, "ShinMinamata MON", is probably the first architecture in the world to be produced by a "form generation + structural optimization (aptimization)" program. ( 'MON' means the 'gate' in Japanese )

The generation of architecture by a program that solves specified criteria was achieved by a previous program in the "INDUCTION DESIGN" series: the WEB FRAME program used to design Subway Station / IIDABASHI (2000).

The program allows the designer to apply loads at any point, in addition to wind load and dead load.
The loads used in actual calculations are shown by the green poles at the top of the completed monument.
The material is thickness 32 mm steel, with widths limited to 120, 90, and 50.
(A limited number of members use thickness 38 mm steel.) Initially, the use of lasers to carve out members from a single steel plate was considered, but that idea was discarded because machining is difficult at these thicknesses. Instead, we decided to use independent members welded together.

The program can also handle curved surfaces, but in view of the image of the monument as a gate it was decided to use a combination of flat surfaces for the actual structure.
The generative program works by extending the growth pattern from the origin, so vertical surfaces are simply extensions of the pattern upward in the direction of growth.

Convergent evolution: Similarity of mechanisms, not an imitation of form

The overall shape of the "ShinMinamata MON" may look like a grove of trees.
But it should be noted that this is by no means due to imitation of the outward appearance of trees.
This shape has no original, and quotes from nothing (although the idea of a gate was present).
The results of the specified generative rules simply turned out to be something that looks like trees.
Strictly speaking, they are not exactly like trees.
(The branches of trees split apart and only rarely come together again.)

Nevertheless, the overall impression is close to trees.
The reason is that the specified generative rules have something in common with the generative rules of trees.
Even aside from branches, it would be possible to discover similar structures by looking at things such as leaf veins, roots, and our own bone structure and bodily organs.

Of course none of these things are imitations of tree branches.
They are structures born out of necessity, completely unrelated to each other, which came to be similar in outward appearance as a result of a search for optimal structures in response to given conditions and purposes. In biology, this phenomenon -- where things like tree branches and bones, which have completely different origins and materials, respond to similar conditions for similar purposes and arrive at the same answer -- is known as convergent evolution.

It could be said that the "ShinMinamata MON" arrived at a form like plants and bone structure through a kind of convergent evolution.

Principles of evaluation: How to produce good things ?

However, this is not simply a multiplication of random options.
Although it does not include an evaluation process, the generative process is a combination of generative principles, so that a certain degree of naturalness
( = balance) can be observed. This is an interesting point.

We could say that a kind of automatic regulation is at work in the rules.
There is no guarantee that the results will be beautiful, but oddly enough only a few cases miss by a large margin.

The questions "what is evaluation?" and "how can we obtain good things?"
are the themes of the "Program of Flow", which is being developed concurrently.
The results of the "KeiRiki" program for "ShinMinamata MON" may suggest possibilities for evaluation methods
(although for now they are nothing more than possibilities).

What is better: Consistently obtaining solutions that meet the conditions /
relieving the constraints on imagination

What is the significance of generating this structure programmatically ?

The same kind of shape could be drawn by hand, and it would also be possible to assemble a structure of members with different thicknesses by calculation. The actual structure could have been designed even without a program like "KeiRiki".
So isn't the program superfluous ?

Of course, you don't need a program if all you want is build a shape that you happen to like.

But suppose that you must meet certain conditions. Suppose that the aperture ratio of the whole must be below a certain value because of wind load.
It would be very difficult to take a shape that was simply drawn to please and make it have a specified aperture ratio.
It would be a process of drawing and revising, repeated over and over until, if everything works out, the conditions are met. Sometimes everything may not work out.

Suppose that there are limits to the length of structural members, or limits to the angles at which branching members can be welded.
The same kind of trial and error process would be needed, with no guarantee that an answer would be found.

The benefit of using a program is that that it allows you to obtain the kind of solution you want, while at the same time solving the conditions.