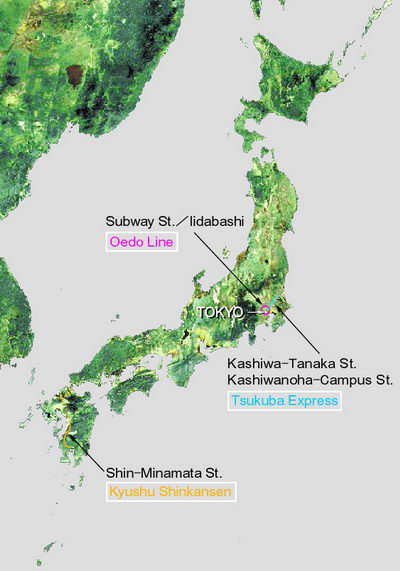 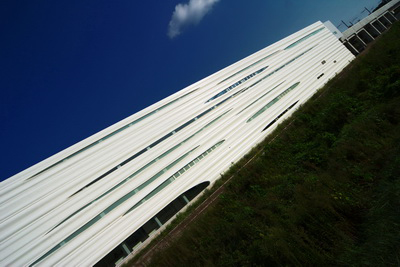 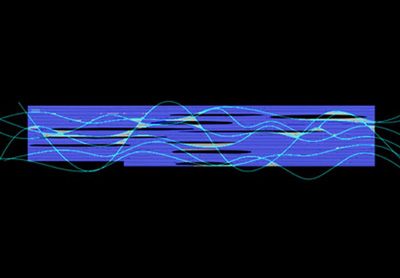 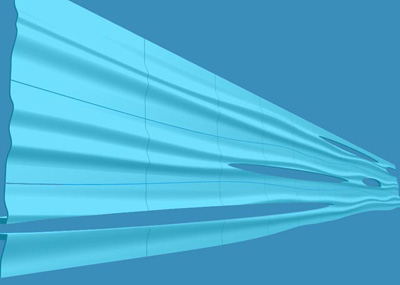 Tsukuba is a new academic and research city located about 50 km north of Tokyo. It is a new community, completed in 1985 with the aim of consolidating national research institutes and relieving congestion in the capital city of Tokyo.
A new railway, the 58-km Tsukuba Express, will open in 2005 to provide a direct link between Tsukuba and Tokyo and to promote urban development along the railway line. Kashiwanoha Campus Station is one of 20 stations to be built for this new line. The natural science departments of two universities are located nearby, along with a large park, leading to a proposal to consider the town as a whole as an open campus. In Japanese, the station name stands for "Oak Leaf ". 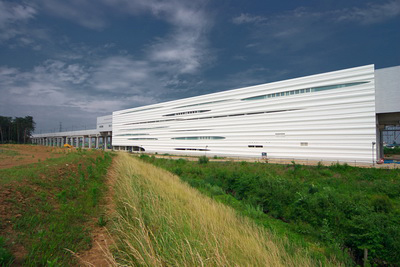 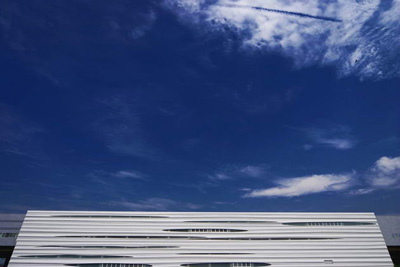 This station is configured with the external skin of the architecture enveloping the engineering structure. The architectural structure is independent from the engineering elements. This hybrid structure, as it is called, is a new configuration not found in conventional railway stations. The consequent overall form is enclosed by two screens which are independent of the engineering structure.
The question was how to build these two screens.
From the important place of the natural science departments in the community, some reference to the natural sciences was called for.
The proximity of the Kashiwanoha Park also called for an image of nature. The solution was to take the two topics of natural science and nature, and overlap them under the theme of flow. There are two types of flow. One is stratified flow, and the other is turbulent flow. Therefore, one of the screens in this station was dedicated to turbulent flow and the other to stratified flow. (Turbulent flow is used here in a metaphoric sense, since there are no actual eddies.)
As expected, the stratified flow is a regular pattern, but the turbulent flow consists of free 3-dimensional curves without any simple regularity.
These types of curves are normally created using one of two methods.
One method is manual trial and error.
After conducting various studies, choose the form that seems best.
The principle is the same whether the material is clay kneaded by hand or computer graphics software displayed on a monitor.
Both are forms of trial and error.

The other method is to utilize an external law of nature.
For example, stir a cup of coffee with a spoon and copy the shape of the resulting waves. The principle is the same even if a simulation is conducted on a PC instead of stirring a cup of coffee.
Both are forms of imitation of nature.

Both of these methods are well known and neither is new.
In both, it makes no difference whether or not a computer is used.
The essential principles are the same, regardless of whether a computer is used or not.
Trial and error and imitation of nature are both valid methods, but they have their limits.
So is there some other way to obtain good waves, without resorting to manual design or imitation ? I decided to make this the next stage in the ongoing Induction Design research project. The goal is to obtain, like magic, something good without defining in advance what good is.
The process is roughly as follows.

1- The designer makes several sketches and passes them on to the program after evaluating them himself.
2- The program infers the designer's intent and proposes sketches which (it expects) will receive an even higher evaluation.
3- The designer evaluates the proposals and returns them to the program.
4- The above steps are repeated until something good is obtained.
The process is easy to describe, but by no means easy to execute.
The key point is that there is no definition of what constitutes good.
This method is innovative because it obtains good things by recognizing them when it sees them, even without a definition of goodness.
This method was tested in the design of the Web Frame for the Iidabashi subway station, which was the world's first architecture generated automatically by a computer program solving conditions. But the computer program for this area alone was still inadequate. This stage focuses on this area.
For example, one glance at a student project is enough to tell whether it is good or bad. But there is no easy answer to the question "What makes good things good ?"
You can list a number of conditions for goodness, but something can meet all of the conditions and still not be good.
All you can say is "It's good if I think it's good when I look at it."
If it were possible to define goodness, then it would be possible to develop a program to produce it, but vague goodness cannot be written into a program.

This program starts from the premise that goodness cannot be defined, and tries to see what can be obtained nevertheless.
The first step, as an approach to handing vagueness, was to develop a program using neural networks and genetic algorithms. This was done under the auspices of the IT Project of the Ministry of Economy, Trade and Industry.
The performance of this initial version was still not sufficient, so a new version based mainly on artificial intelligence is now being developed. Meanwhile, work on the architectural project has to proceed, so both aspects are being pursued in tandem.

Absence of the Whole / Rules of Parts Create the Whole 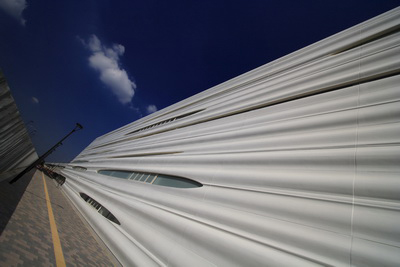 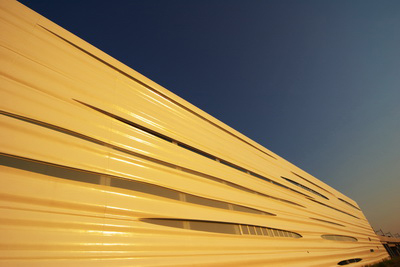 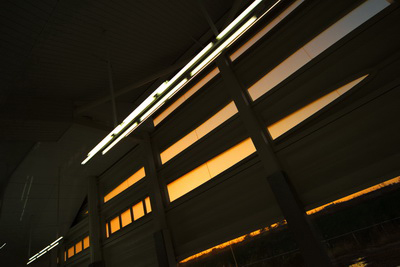 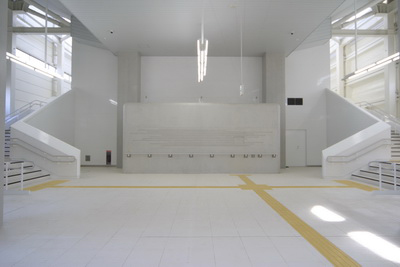 The wave curves are made from Glass-fibre Reinforced Concrete (GRC). Units are sized 5m by approx. 2m, and attached to the structure at intervals of 5m. Interior and exterior walls are opposite faces of the same unit. The exterior side is painted with a coating that causes grime to dissolve naturally.
GRC units are made with molds. Cost considerations limited the number of molds that could be made, so the design could use only a limited number of unit variations. Of course adjacent units also had to flow into one another, so that it was not possible to achieve variety by combining any unit with any other.
In order to create diversity and prevent the limited number of variations from falling into monotonous repetition, simulations were carried out using recursive shapes that could be connected when reversed. (A program was planned for this step as well, but could not be finished in time.)

The peripheries of these screens are handled as if cut away.
This indicates that the surfaces continue to expand.
Rectangular segments of these sizes just happened to be cut out of enormous fluid surfaces that continue to expand forever, and the result was these screens. In this sense, there are rules which govern the birth of individual waves, but no rules that govern the whole.
The whole is generated solely from the rules which produce the individual waves. There are parts, but there is no whole.