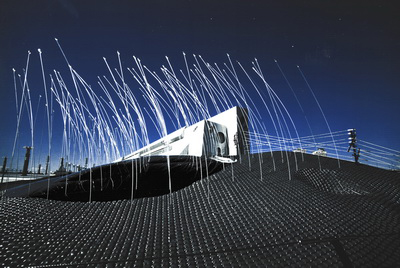 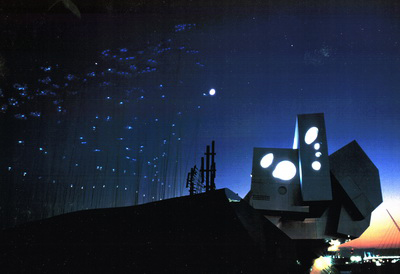 I thought I would like to make something lithe, pliant, supple...

Trees rustling in the wind. Wind tracing waves through a field of grass. Living things, even plants rooted firmly in the ground, are never simply immobile. They change their stance and shape and form in response to wind and rain, light and temperature.
Adapting to conditions in the surrounding space, they assume the posture which requires the least expenditure of energy.

For the observer, this frugal, simple and unrelenting determination to live affords a sense of sheer pleasure, and is also the mechanism which underlies the beauty of the living organism.

What I sought to do was to make something that, though a product of human effort, could partake of this kind of beauty.

"FIBER WAVE" is composed of many thin carbon fiber rods of 4.5~ meters height. When the wind blows, these rods sway gently; they stand still when the air is calm.

Up until now, most of the many kinds of man-made structures designed to move under the force of wind or water have belonged to the family of windmills and waterwheels, their motion defined by a rotational device.
A simple, machine-like movement, the ultimate instance of which is the automobile.

This kind of mechanism is peculiar to man-made devices, almost non-existent in the natural world. About the only living organisms equipped with rotators are certain species of microbes.

Architectural structures are built to resist the wind and stand firm. "FIBER WAVE" does not fight against the wind. It bends low when the wind is strong and wavers gently when the wind is weak, submitting naturally to the force of the wind.
Still, like a solid building it is safe against harm from even strong winds.

Grasses and trees waver and bend with the wind in the same way, receiving its force without resisting.

"FIBER WAVE" is an artificial object which follows nature's lesson in suppleness.

The motion of "FIBER WAVE" is decided by the 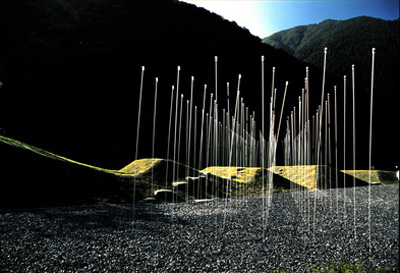 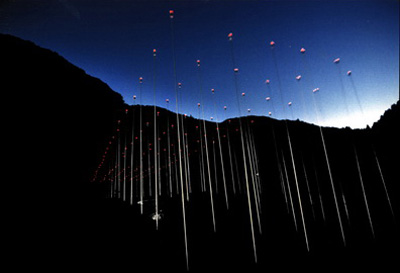 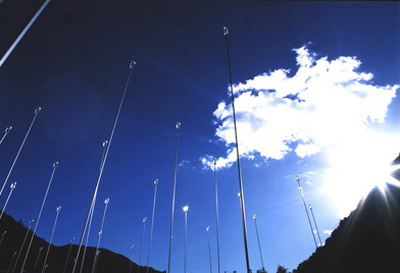 All man-made objects, whether architectural structures, works of art, or lighting fixtures, are designed. Their form is decided by their designer. Design is, after all, an activity of determining form.

Would it not be possible to create an artificial object without design ?

Design, that is, without design ?
This is not meant as a paradox. The underlying goal of this project is a reformation of the activity we call design.

"FIBER WAVE" -- rods swaying in the wind like a field of grass, blue lights dancing like a cloud of fireflies.
Its movements are protean and at the same time harmonious.

Its movements are not however specified by the designer.
Only the flexibility of the rods in response to the force of the wind and the arrangement of the rods determine how it will move. The "form" of motion is not designed. All that was designed is the "code" defining its physical properties and arrangement.

Form is determined by "rules" of nature. The rhythms and patterns latent in the wind are articulated through the medium of "FIBER WAVE."
Endless variations in the form of "FIBER WAVE" are generated by the force and direction and shifting conditions of the wind. Yet even though its form and movement are free and diverse, they are not random: one senses the underlying regularities of natural law.

The method used here is not one of directly specifying the form, that which appears on the surface, but rather of deciding the mechanism which gives birth to form as its effect.

Such a method suggests new possibilities which may open onto the future of design. 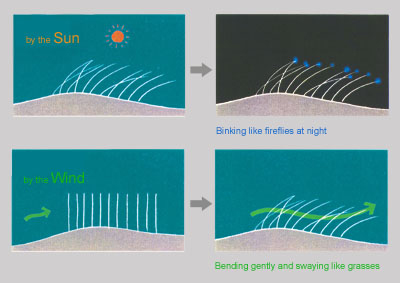 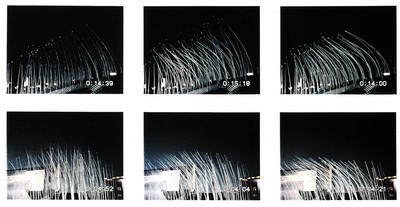 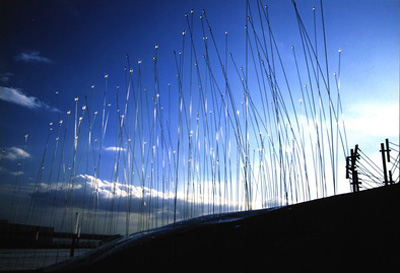 "FIBER WAVE" sways naturally with the force of the wind.
The light of the sun is stored up during the day and emitted spontaneously by night. Neither mechanical nor electrical power is used.
Moved by the wind and lighted by the sun, ecological: this is indeed an example of what "environmental sculpture" should be.

The transparent chip at the tip of each rod sparkles in the sunlight during the day. One can feel the wind, but cannot see it. It is when we see the movement of something that we become aware of the wind. To see the wind we need something supple that sways. "FIBER WAVE" is just such a device for making the wind visible.

There is a correspondence here between "FIBER WAVE" and my another work "K-MUSEUM" of Tokyo Frontier City, standing in the background of this landscape, and designed to make visible the underground channel which forms the unseen lifeline of these urban streets.

Ecology begins when people see and respond to what they see with empathy.

Hence the importance of bringing the city, invisible in itself, into view.
That is the mission of architecture and the role of art, as well.