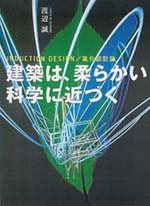 This book aims to illustrate a new design philosophy, a new methodology, and the background behind them.
It introduces the Induction Cities project, a test case for the methodology in which, for the first time in the world, computer programs generated architecture by solving conditions.
It introduces the iidabashi subway station project and also touches on the next stage in the project, which is currently underway.
The purpose is not to discover form. The purpose is to discover ways of making cities and architecture that provide better solutions to problems facing the world while at the same time offering greater freedom to the imagination.

Essentially, design begins by selecting a single line.
It is not a matter of choosing this line or that line, or any line.
Design is a matter of choosing a specific line, the only possible one.
City planning and architectural planning, surfaces, forms and materials - they are all determined by this line.
The line needs to a good one. In this case, good means, first of all, useful. Useful means that it solves the conditions posed by the project. Every project has conditions that require solutions. It could be a matter of improving urban circulation, or protecting the environment of a neighborhood, or discovering a new relationship between integrated functions, or thinking about a lavatory that is easy for anyone to use, or designing a keyboard that does not tire the hands.
Every design has issues that need to be solved. After studying the issues from various angles, you select the line that provides the best solution. It is like solving a puzzle - a very intricate and complicated puzzle.

But the difference between a solving a design problem and solving a puzzle is that simply meeting the conditions is not enough.
Another requirement of a good line is that it must feel good.
Feeling good is never included in functional specifications.
Nor it is exactly clear who has to feel good about it.
The designer himself should like it. People who use it should feel good about it. This vague kind of feeling is essential to good lines and good designs.
So design is a matter of selecting lines with these dual virtues.
But how does one go about this task ?
When you try define a method, you realize that it cannot be explained.

Design starts with an examination of the conditions. You make studies, and more studies.
You have ideas, and gradually the details begin to fall into place.
It is a process of selecting a line, and then another line. But it is hard to say exactly how you chose any of those lines.
You can give reasons for the choice, but that is all after the fact. If you were honest, you would say you did not know how.
To clarify this process, you need to write down what was good about something, why you selected it.
You need to exteriorize what went on in your mind so that other people can understand it, to describe on white paper a fraction of what happened in the black box that is your brain.
And if you can describe it, then you can program it.
If you can program it, then you can run it on a computer. Running something on a computer clarifies things that were vague.
What was good about it, why that line ?
What is good about that line ?
What makes it better than other lines, and how much better ?
To clarify these questions is to bring design closer to the status of a science.

The idea is not to automate design. It is not about being able to complete a design with a click of the mouse. The purpose is to clarify aspects of the process that were vague up to now, and so to get a better idea of what we really want. It is about higher quality, not more efficiency. We want it to be better, not faster.
It is also not about having the computer create a large number of proposals from which to choose. It is not about using computers to create unusual forms. When used like that, a computer would be nothing more than an extension of the pen in the hand. It is about using computers to think, as an extension of the brain.

But it is not a simply a matter of having the computer generate forms. What we want is for the program to generate proposals that solve the design conditions. Further, unlike conventional design, which specifies everything, we leave some things undecided, while still meeting the required design conditions.
Instead of methodically deciding everything from the top down, we make decisions from the bottom up, specifying the relationships between parts while satisfying the need for overall balance.
This approach has something in common with complexity science. Its procedures are akin to the discovery of hidden structures in urban and social systems. Complexity science has discovered simple principles hidden within what appears to be utter disorder.
To use chaos theory and fractals is not to create forms resembling Lorenz attractors, or jagged outlines. Instead of forms, it is the process which contributes to design. In this sense, artificial life, genetic algorithms and neural network programs can also contribute.

The Induction Cities project began 12 years ago as a research and development project into this kind of Intelligent Design, or Program Aided Design.
The first phase of the project was devoted to trials, and the second phase to developing a set of programs for making cities. In the third phase, it was applied to an actual architectural project, the Web Frame of the Subway station / Iidabashi. The fourth phase, which is currently underway, involves the development of programs to meet emotional and other conditions. This will be applied in the New Station project.

The Induction Cities methodology has a great deal in common with the workings of nature.
But it does not imitate nature or copy the forms of plants. It has a structure close to a natural ecosystem because it sets values and programs ways to realize those values. The similarity to natural systems was unexpected but real. In this sense, architecture generated by the Induction Cities project could be called Bi-Organic @rchitecture.
Closeness to nature does not come from similarities in forms.
The forms are similar because they were produced by similar systems, which were reasonable means to achieving goals under specific conditions. Forms are the result, not the starting point.

Computer programs cannot design everything. Computers are better than human brains for tasks like solving complex puzzles.
On the other hand, they cannot imagine things which have never existed. Computers and people each have their own special abilities, and we should get better answers when they cooperate on a design. The human brain cannot perform at its best when it is bound by a complex system of conditions.
Freeing it from those restraints gives it the liberty to imagine.
What we want is a method which is free, but which also comes up with good answers to the problems.

This book is about a way of thinking and experimentation which is freer, and which paradoxically also comes up with more exact solution to conditions.
Unlike conventional design, which tries to decide everything, Induction Cities is a method for inducing results that meet conditions. In this sense, it could be called Induction Design.
It could also be called Generative Design, since it is born from conditions, or Evolutionary Design, since it has the characteristic that results improve over generations.
It is an Odyssey toward a new design method that will make architecture and cities better.