A General Solution for the Townscape: Diversity through Simple Principles 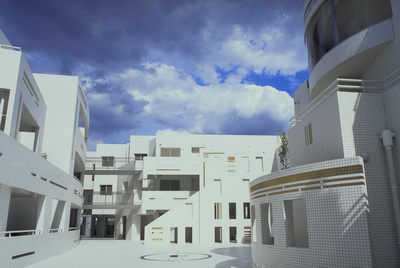 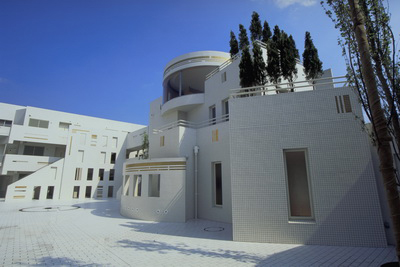 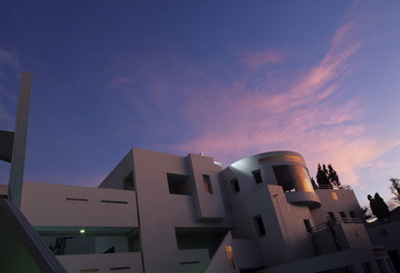 The suburb of Ogikubo, where this building stands, is 15 minutes by express train from Shinjuku, one of Tokyo's largest transportation terminal hubs.
It is a town of small, single-family dwellings.

Partly as a result of Japan's tax laws, residential land tends to be broken up into increasingly smaller units each time it passes from one generation to another, and so housing sites have a general tendency to grow smaller.

In this suburb, however, that process has largely reached its limit, so now the process is reversing and beginning to cluster together into an increasing number of multi-unit dwellings.

So in a locale once characterized mainly by street-after-street of small-scale, larger scale structures are beginning to loom on the landscape.

And yet, no one has presented any kind of plan suggesting what the townscape ought to be made to look like.
It is just an ordinary residential district, quite unlike the streets of traditional Kyoto with their two-story wooden houses, nor the bustling business district bristling with super high rises of Shinjuku, nor the commercial center of Shibuya with its shops and entertainment places bursting with untrammeled energy.
It is a town that knows it has to change but doesn't know what new identity it wants to acquire.

Such towns can be found in many places throughout Tokyo, or Japan, or Asia, for that matter.
They are towns groping for a new image of themselves. It is in this kind of town that this building took shape.

From the Compositional Principle of the Town:
THE REGULARITY IN IRREGULARITY 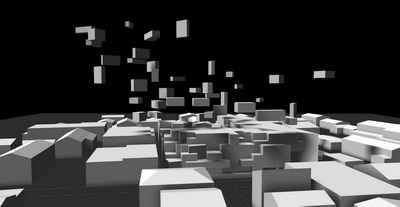 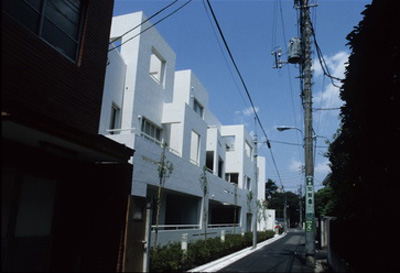 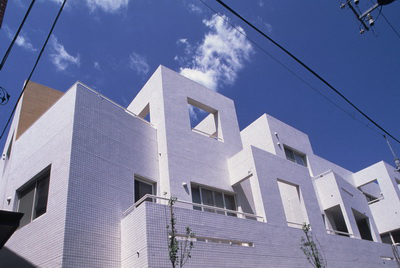 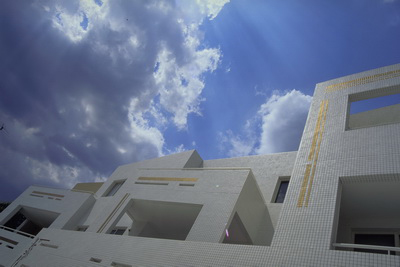 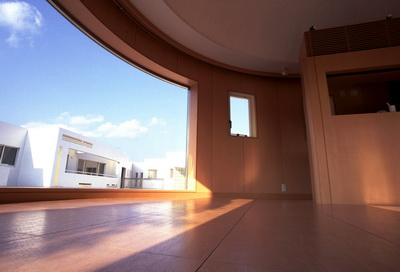 The sense of scale of Ogikubo molded by modest-sized houses, narrow streets and alleys and tidily kept gardens gives the area an intimate, homey feel.
Yet the clusters of houses that are all a little different give the town a unity without rigid uniformity.
Both these aspects are its image and its attraction. In order to make viable multi-unit housing of a scale larger than single houses while maintaining these virtues of the townscape, I sought a whole new solution.

That solution represents the endeavor both to utilize compositional principles abstracted from the townscape as it is today and, to pursue a new direction for the town that is not just an extension of the present but that responds to the changes that will occur in the years to come.

We prepared 16 different types of plans for the 20 dwellings to be built on the site and combined them as individually unique volumes.
In the process we did not try to stack up units of similar type or break up the integrity of a single volume, but adopted the approach of clustering the dwelling units as separate entities.
In place of high, imposing walls, we composed the whole by placing the units at angles to each other and clustering them in a loose and well-modulated composition.

The result is not so much a single architectural entity, but a segment of the townscape.
This principle applies to the whole and to any part of this structure.
Because of restrictions concerning blocking of sunlight on the north side and the necessity to include a parking lot, the northern walls are rather high, but set back well into the site and the low maintenance structure in front of it serves to modulate the differences in height.

This method of composition derives not from forcing the units to conform to strict overall rules, but by a flexible application of part-specific codes.
Each code is applied to certain parts of the building.
For example:

- When like units are adjacent, their angle of placement is shifted
(non-horizontality)

- No repetition of units of like size, stacking of series of different sizes
(non-continuity)

This method makes it possible to obtain both subtle irregularity and an uncorrupted overall balance deriving from that subtlety.
The regularity/irregularity cannot be achieved using an explicit or strict set of governing rules.
What is important is the effect of the codes that vaguely exist but cannot be clearly identified.
A town that comes into being not artificially but spontaneously and with natural warmth is the result of this ambiguity of codes.

This method makes it possible to obtain both subtle irregularity and an uncorrupted overall balance deriving from that subtlety.
The regularity/irregularity cannot be achieved using an explicit or strict set of governing rules.
What is important is the effect of the codes that vaguely exist but cannot be clearly identified.
A town that comes into being not artificially but spontaneously and with natural warmth is the result of this ambiguity of codes.

Such codes may be similar to the implicit rules governing the way rocks are arranged in a traditional Japanese garden.
Another analogy may be found in the way guests at a party initially mill around and finally gather in spontaneously formed groups.
Searching for implicit and potential-filled codes pertinent to a townscape and programming them for architectural design should be the requisite topic of research on the creation/generation of the city.
Part of our research on this theme will be discussed in greater detail in a separate section on the INDUCTION-CITIES project.
A similar principle of architecture is employed for this Atlas project, but in terms of methodology it depends not so much on computer programming as a human-created program.

It goes without saying that a building created in that manner is not presented in a simple, overall package.
Packaging an entire building in a simple form is synonymous to "inserting" a foreign element incongruous with the scale and character of the townscape where the building is located.
That was averted in the case of Atlas, in which we sought a building generated spontaneously and harmonized with the townscape.
The idea here corresponds to the conviction that houses should be different from one another just as human beings are. It seems quite unnatural that while single-family dwellings differ from one another, the units of multi-unit housing are all uniform.

One way of endowing such units with diversity is to diversify their balconies or other auxiliary spaces.
In place of that approach, we tried as much as possible to vary the designs in terms of their basic plans and frameworks.

Elements of Unity: Color and Texture 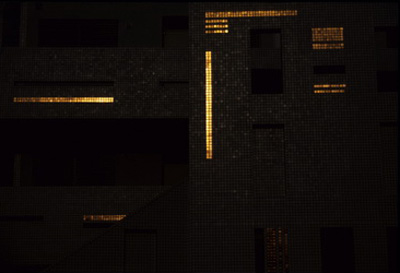 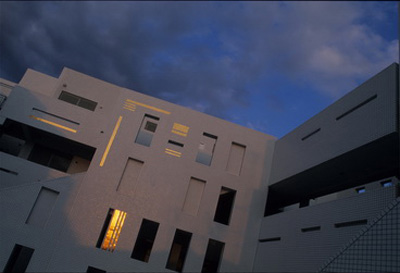 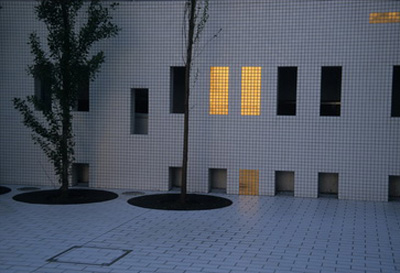 In contrast to the individually differing composition of the units, we used color and texture to give unity to the whole.
The floor and walls of the inner court are in whites, accentuating the tenderly embraced space.
The tile is unglazed in order to obtain a transparency in the white color.

Also to correspond to the composition of varying units combined, earthy yellow was applied to two walls, one facing the inner court and the other facing the street.
The roof of the dome is blue, linking it to the sky.

The independent doorways on the approach are made solely of stone without a wooden frame for reinforcement using a newly developed method for gluing two slaps of granite with carbon fiber film.

Narrow slit windows and golden tile lines are transcribed on the white walls.
This method was adopted based on rules different from those applied to the overall composition.
This combination of different methods is derived from the understanding that a town is not composed by homogeneous principles.

The slits and lines impart more than a visual impression of movement.
The golden lines on the walls set at varying angles and stretching in different directions receive and reflect the rays of the sun, indirectly registering the passage of time, a response to nature like a sundial.

What a Condominium Can Do:
A General Solution for the Townscape 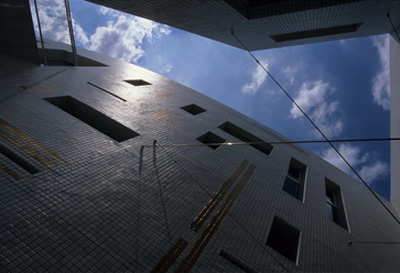 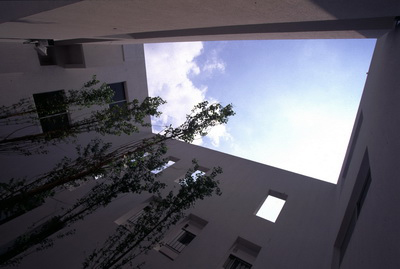 This architecture is a multi-unit housing complex with each unit under individual ownership.
In Japan today, unlike a rental dwelling, a condominium tends to be considered an asset that will be sold later, and so the value of a space like a courtyard is rarely appreciated.
For that reason, architects rarely make execution drawings for or supervise the construction of multi-unit dwellings. These tasks are usually performed by developers or design firms specializing in those functions.
Consequently, such dwellings are generally made up of units in a standardized style, like so many stacked boxes. The reality, then, is that the typical residential townscape is full of "architect-less" multi-unit buildings.

These buildings are called manshon in the Japanese real estate terminology. The term is used to imply associations with the English word mansion, but the two are worlds apart in terms of what they actually denote. Needless to say, architects never use the term manshon. They call condominiums bunjo shugo jutaku, "multi-unit dwellings subdivided for individual ownership."
The fact that the same type of building thus has different designations indicates the ambiguous status of condominiums in Japan.

Condominiums are usually built according to strict conditions, peculiar to the manshon business, concerning rate of building volume to lot, construction cost, what specifications are spelled out in a catalogue, and so on.
Of course, it may be necessary to build some that bend or break these rules, but such works are treated as minor exceptions and have little impact on the overall townscape created by many manshon buildings. Standardized dwellings continue to be erected in larger numbers.

My aim is to send out a new message about creating townscapes and living spaces, and to provide an architectural method anyone can use while fulfilling the same market economic conditions-though not all the conditions-met by conventional manshon buildings.

That does not mean that I am trying to accept the status quo uncritically.
What I am saying is that, if one is critical of the current situation, one needs to present an alternative that is universally feasible.
My proposed condominium might well appear, just as ordinary manshon buildings often do, in leaflet ads inserted into home-delivered newspapers.
The important difference is that features generally not mentioned in such advertisements would be incorporated into multi-unit buildings of this new type.

This new approach would, I believe, make our townscapes a little more livable.
The proposal may also occasion healthy debate on what constitutes a good townscape.
Some of the possible solutions that would result from such debate may then become common solutions not just for Japanese cities but for cities in Asia and throughout the whole world.

Cities ought to be diverse.
How a city looks should vary from one city to another. The commercial center of Shibuya, the residential area of Ogikubo, and the "Frontier" district on the Tokyo Bay waterfront should all differ from one another.
There must be more than one solution to the problem of creating pleasing, livable townscapes.