Creating an atmosphere / As a single leaf

A long time ago, about 2.3 billion years in the past, there was very little oxygen in the Earth’s atmosphere. But gradually photosynthesizing organisms began to produce it, until eventually it became abundant. Other organisms used this new element to produce energy, leading to a dramatic expansion of their sphere of activity. The result is the biosphere that exists today.
It seems natural that today’s atmosphere contains about 20% oxygen. Many organisms are "designed" to flourish in such an environment. It seems so ordinary that we take it for granted. Without it nothing would be possible. But it was not always there. It was created by living organisms.

ALGODeQ is like this process of creating oxygen in a world that contains very little of it. Eventually "algorithmic design" will seem as commonplace to designers as the air we breathe. It will be something that we simply use without being conscious of it, without even naming it.
The atmosphere – the precondition for everything we do.
Algorithmic design – an indispensable method for generating our world in a better way. Both will be things that are always there, indispensable elements that we rarely think about.

ALGODeQ is like the leaves of a young plant, generating the atmosphere that is algorithmic design.
Eventually this young plant will grow to become a tree, and the tree will become a forest. 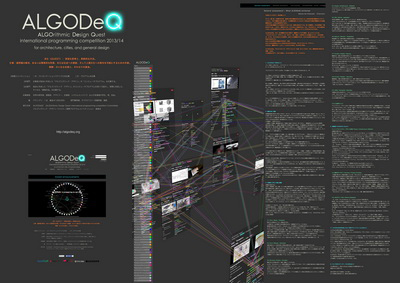 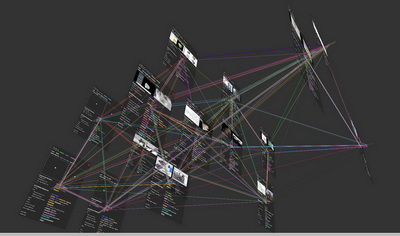 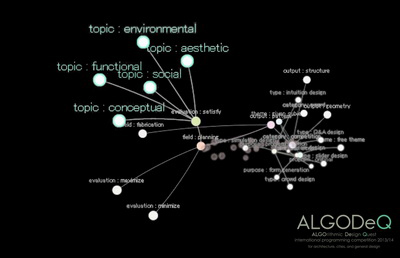 ALGODeQ is probably the world’s first international competition for algorithmic design programs themselves. What were its objectives, and what was obtained?

Algorithmic design was described and de ned in the competition guidelines.

The guidelines indicated that entries would be expected to demonstrate value in three areas: the problems that the entry wants to solve (its objectives), the method used to solve them, and the results.
On the basis of the above, the guidelines described eight evaluation criteria.

There are no limits to the problems that can be solved. From a personal sense of what makes something beautiful to urban and social issues and further to the future of humanity or the evolution of the universe, any problem is valid. From among those limitless possibilities, entries were expected to select problems and share them with others as important problems to be solved. That is the "value" of a problem.

The value of a method is easy to understand. It is a new technique or a new approach, one never seen before, that solves a previously unsolvable problem or solves it in a more elegant way.
In many cases, the result will be a design. Or it may take the form of text, music, or some other creative work.

Of the eight evaluation criteria, "genetic in uence" refers to the possibility of a next-generation set that may emerge from the set of "problem de nition / method development / presentation of results" represented by the competition entry.
This refers to the evolutionary process of algorithmic design. This process is the outstanding characteristic of algorithmic design and the one that sets it apart from traditional architectural methodologies.
So then, what about the proposals that were submitted and selected according to this program and these ideals?
.......