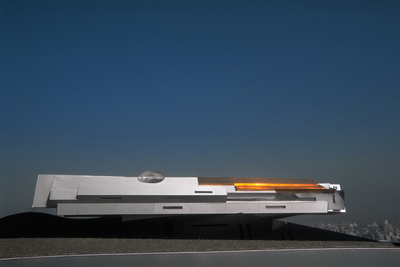 above: model
below: photos 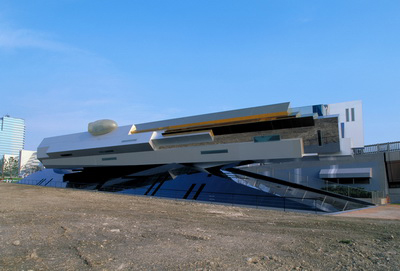 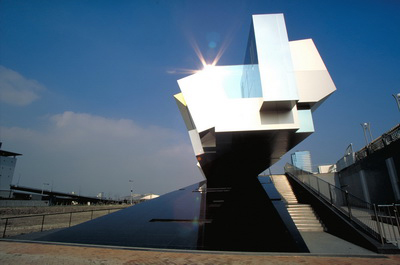 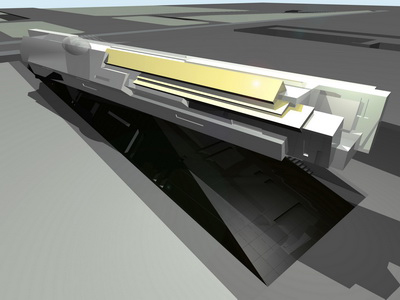 A new sub-center of an old metropolis is appearing on the Tokyo Bay waterfront. Ever since the early seventeenth century when the village of Edo (now Tokyo) became the seat of the shogunal government, urban growth has been a process of transforming sea into city, in other words, urban expansion through land reclamation. What I call the Tokyo "Frontier" is the final site of Tokyo's expansion of twentieth century times when growth was a virtue in itself.

The dynamism of a city is determined by economic conditions, however. The construction of the Frontier started in the 1980s amid the so-called bubble business boom. Its infrastructure had been nearly completed and superstructures were about to go up when the worst recession since the end of World War II hit Japan in the early 1990s. A planned exposition of the world's cities scheduled to take place in this water-front project was canceled by a popularly elected governor whose background was in show business. Corporations that had planned to build office architectures there decided to postpone construction plans indefinitely. The center of the new city, which was to have grown up as a mammoth new business district, remained vacant, a vast empty space.

This museum rises into the very heart of this incipient city.
The purpose of the museum is to explain the infrastructure of the city. Beneath the city is buried a huge common tunnel system for pooling energy, information, disposing of refuse, and for other purposes required in the future, the largest of its kind in Japan.
The cost of the construction was the equivalent of that for architecture a nuclear power plant. The museum is a facility to place this system on public display.

The area that was to have been the hub of the new sub-city is a vast empty space. Though already included among the urban centers of Tokyo, the landscape is even more undeveloped than Tokyo's remotest suburb. A complex that came into being only after having destroyed the local ecosystem, unless it is developed into a true urban ecosystem, the area will be a meaningless void that is neither urban nor rural.

What is required of an architectural work meant for such a context devoid of any identity, with no older townscape to provide a point of reference, no cultural heritage to inherit, no nature to respect, and no future to forecast ?
The answer lies in light. A bright light to illuminate the void. A light of such intensity that it stirs its surroundings to action. By the nature of its function, one small work of architecture alone will not attract throngs of visitors. The purpose of the architecture is to play the role of qualitative-not quantitative-urbanity. The architecture should be a model that is the city itself. What then should be extracted to represent the character of this city ? 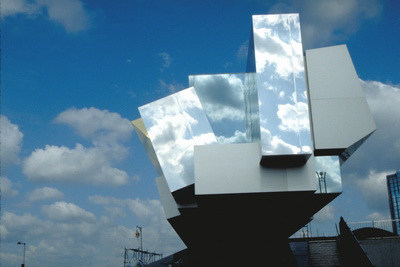 Oneof characteristics of the city is diversity. The city offers a choice of several routes for achieving any particular purpose. In the process of achieving the goal, peripheral functions inevitably come into play of their own accord. Whenever choices are made according to a certain set of criteria, invariably there are people, things, and phenomena that cannot be dealt with according to those criteria. The interaction of many different elements makes the character of the city complex beyond comprehension by a single standard of measure.

A combination of simple units produces a complex whole.
The museum is a model rendering of an urban structure based on that principle. The metal units used are of basically simple, abstract forms. Their combination produces a diverse whole. There also are several types of these textures, and combining them encourages further diversity. Light is the element that provides the clues to this approach.

Even small variations in the transmission, reflectivity, and wavelength of light turn out to make a big difference. Differences in the angle of the reflecting plane deflect the light and amplify the movements of the sun. As a result, our perceptions of the forms change with the passage of time.Thus, the combination of limited materials and forms generates awhole made complex through the medium of light. 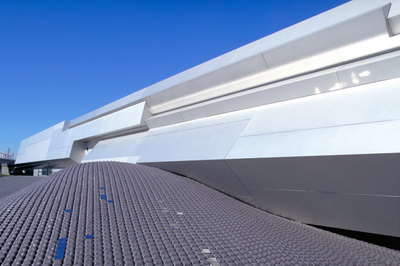 The topography is formed by the undulating base structure combined with the museum architecture. Whereas the architecture itself is made in a manner that responds to light, the outer structure is covered with a light-absorbing black material. Moreover, while the architecture is made up of rectangular units, the outer structure is composed of three-dimensional curved surfaces.
This sharp contrast is fundamental to the museum architecture.
This kind of balance-that one extreme always has its counterpart-is a fundamental principle of the city as well.

One of the features of contrasting extremes is that each pole acknowledges that part of itself can be found in the other. This is the function known as "interchangeability." In this work, the light of the architecture is seen as "chips" of reflected metal visible among the black waves, and part of the wave becomes a semitransparent, curved volume partially buried in the metal wall of the architecture.

The area under the architecture houses a water supply plant serving the facilities in the vicinity, another aspect of the urban infrastructure. Covered with black stone and tile, with openings the pedestal to support the architecture, its shape undulates making the architecture look as if it were drifting among black waves.

The waves are etched with slender silver lines that seem to whirl in the wind. They are environment sculptures called " Touching the Wind / FIBER WAVE" that serve as an interface connecting the solid, motionless architecture and the constantly changing nature/city, and coordinating their relationship. This presence of a function to accommodate the interrelations of different elements-an etiquette ofbalance-is another fundamental rule governing the city where diverse elements gather.

The Moment: A Dash The form of this museum expresses a strong sense of direction.
It touches ground at its base only partially. One cannot tell whether it symbolizes a moment of take off before flight or the moment of touchdown after a long flight. We only know that it is a very brief moment of repose in the process of transfer from one mode to another. Modes are right in the process of being changing.
The perception here is that a city is eternally in that state of changing modes. And this movement animates the city, imbuing it with life. 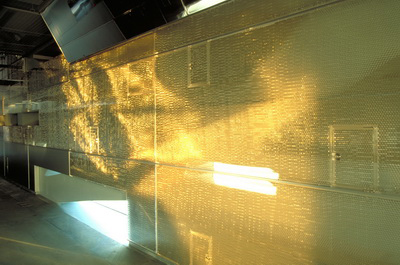 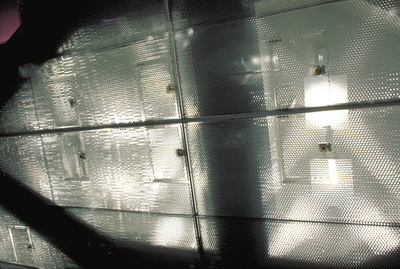 A number of finished materials developed specially for this architecture are used. It was desired that joints be simple, and panels large and three-dimensional.

Aluminum and stainless panels for the exterior are large ones with no seals and using open joints. The three-dimensional solid bodies are installed after the panels are assembled using narrow three millimeter-wide joints. Four types of finished materials-alumetized and fluorine-coated aluminum and mirror-surface and gold-colored stainless-are combined. For the interior walls and ceilings a newly developed material consisting of two acrylic sheets with aluminum honeycomb sandwiched between them is used. Illumination set behind this material, named "Acry honeycomb," illuminates the silver honeycomb.

The top-light curved surface was created through the integral forming of semitransparent fiber reinforced plastics (FRP), five meters in major axis. In order to obtain a moderately transparent FRP with a minimum of yellowish color, many tests were conducted, including hardener blending adjustment and the screening of glass fiber and basic materials. Thick ditched steel sheets, a temporary material usually employed at factories and other works, are coated with fused zinc and used for the floor inside the architecture.

The three-dimensional, curved floor of the undulating base structure is covered with stone and tile. The stone is polished black granite, and the three-dimensional curved surfaces are obtained by shaving planks. Four types of tiles, each having curved solid bodies, are combined at random.

The " Touching the Wind / FIBER WAVE " environmental sculptures of carbon fiber are an advanced version of what was first developed for the " MURA-NO TERRACE ". A blue light-emitting diode, not developed previously, is used along the edges. The solar cell units used this time are also more compact.

The self-contained toilet booths inside the architecture are unit forms made by bending artificial marble. Its essential parts, such as doors, washstands, and exhaust column, are made as much as possible of the same artificial marble.

Display: Getting the Message Across 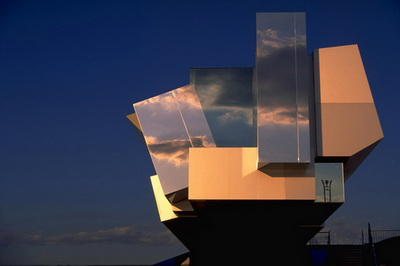 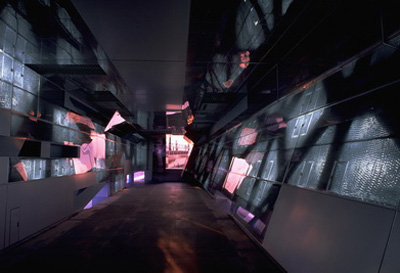 My idea from the outset is that the museum architecture itself is an item on display.
It is a facility aimed to help understand the infrastructure of the city. Because its purpose is very specific, the architecture need not be a flexible exhibition space like an ordinary gallery. It is not meant as a universal space.

The city's underground tunnel itself is part of the sight-seeing trail for visitors, who can go inside and see for themselves. Therefore, we might go so far as to say that the purpose of the museum architecture will be fulfilled as long as seeing the architecture stimulates people to think of what a city should be like.
The function of the architecture will be satisfied if it gets across to visitors the message that diversity, availability of options, contrast, interaction, light, and direction should provide the infrastructure of the city.
Both miniature models and digital media are used in the exhibition.
The video screen is a state-of-the-art 40-inch plasma display.
The independent toilet units are also exhibition items of an urban facility. 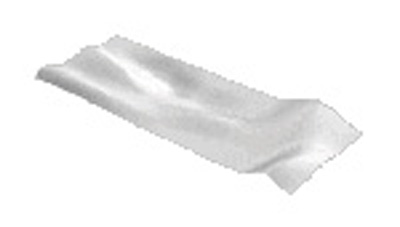 Computer-aided design and computer graphics as well as miniature models were used for the studies of the space and form of the architecture. The undulating three-dimensional curved surfaces were first studied using miniature models, which were then turned into CAD images through a 3-D scanner. The CAD images were then checked with analog measurements, and the results yielded the data for the stonework.
Thus we adopted a policy utilizing both digital and analog technologies, comparing and coordinating them so that the strengths of each could be utilized. This policy conforms with the design concept and perception that the appeal of the city is the panoply of choices it offers.